Status: Open To The Public • Thursday-Sunday

Where the Allman Brothers Called Home.

In 1969, a revolution known as the Allman Brothers Band was launched from the streets of Macon, consisting of guitars, bass, keyboards, drums and a uniquely spirited brotherhood. As founders of what became known as Southern rock, the Allman Brothers changed the course of popular American music and turned Macon into the recording hot bed of the 1970s. From 1969 to 1979, the Allman Brothers called Macon home, and their contributions and exploits have become a legendary part of this town’s history.

The band was formed in Jacksonville, Florida, in 1969 by brother Duane Allman (slide guitar and lead guitar) with Gregg Allman (vocals, organ, songwriting), Dickey Betts (lead guitar, vocals, songwriting), Berry Oakley (bass guitar), Butch Trucks (drums), and Jaimoe (drums). While the band has been called the principal architects of Southern rock, they also incorporated elements of blues, jazz and country music. Their live shows have been signatures of jam band-style improvisation and instrumentals.

The Big House is located at the legendary street address of 2321 Vineville Avenue. In 1969, it was for rent, and by January 1970, it became the house where members of the band, their roadies, friends and families lived until 1973. It was the focal point of gathering in those early years when the Allman Brothers Band was just taking shape and their music began radiating from the historic Southern town of Macon, Georgia.

In addition to displays, archives and exhibits of historic materials, instruments and music memorabilia related to the Allman Brothers Band and their music movement, there are recreations of the original rooms that once housed Duane Allman’s bedroom, Berry Oakley’s daughter Brittany’s childhood bedroom and the “Casbah” music room, where music was made and listened to in a boho-vibe sunroom.

The grounds of the Big House Museum include a concert pavilion and beautiful outdoor setting, including the iconic mushroom gate, the sprawling front porch and a backyard recreation of the Fillmore East album cover backdrop.

The Big House is open from Thursday through Sunday. It often hosts public concerts and private events. Check thebighousemuseum.com for hours of operation and to pre-plan your visit and reserve your tickets online.

The Allman Brothers Band Museum at the Big House is located in the historic Midtown area of Macon known as the Vineville Historic District. A portion of Vineville Avenue, where the Big House is located, was re-named in memory of Duane Allman as Duane Allman Boulevard. In further tribute, Duane Allman Boulevard crosses the Raymond Berry Oakley II Bridge, named in memory of bassist Berry Oakley. This honorary connector leads to nearby Downtown Macon, where you trace the steps of the Allman Brothers Band brotherhood by dining at the legendary H&H Restaurant , discover the College Street site of the original “Hippie Crashpad” and first album cover and reflect and pay your respects at Rose Hill Cemetery , where iconic music was inspired and three of the original members are now interred.

The Big House is also located near the Pleasant Hill Neighborhood, where the childhood home of Little Richard Penniman can be found at 416 Craft Street. 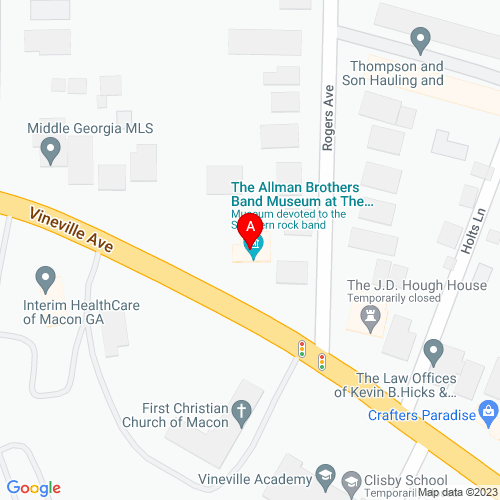