The Site of Macon’s Music Business.

The official headquarters of Capricorn Records were located in executive offices along Cotton Avenue (now D.T. Walton Sr. Way), where it served as the independent record label for many southern bands of the 1970s, including the Allman Brothers, Marshall Tucker, Wet Willie, Cowboy, Elvin Bishop and many more. In addition to offices that housed the publicity, A&R departments and more, there was also an adjoining Capricorn Park, where many of the famed label’s announcements were made.

At the encouragement of his mentor, Atlantic Records’ Jerry Wexler, Phil Walden launched Capricorn Records at this original location. The name of the label came from the zodiac sign of both Walden and Wexler. Capricorn Records started a new era in music as an independent record label dedicated to what would later be coined as Southern Rock.

Following the launch of Capricorn Records, the Capricorn Sound Studios (now Mercer Music at Capricorn) would open a few blocks away from the headquarters, as the official recording studio.

But prior to serving as Capricorn, this same building was home to Phil Walden Artists & Promotions, Walden & Associates, Jotis Records, and their umbrella RedWal Music Co, which was owned by Walden, his younger brother Alan and Otis Redding.

RedWal Music Company was received as one of the first integrated office staffs in Macon and was home to one of the country’s largest rhythm and blues agencies. Among the artists represented here were Redding, Sam & Dave, Percy Sledge, Arthur Conley, Eddie Floyd, Johnny Taylor, Etta James and more.

After Redding’s tragic death in 1967, RedWal Music was no more. Two years later, Walden, along with his brother Alan and former Atlantic Records music executive Frank Fenter, would start over with a new business plan and re-birth the office building as Capricorn Records.

As the success of the label grew, so did its real estate holdings. In addition to the main office, Capricorn acquired property across its alleyway, which was converted into executive suites for Walden and Fenter, as well as create a “pocket park” where a dilapidated building once stood.

Capricorn Park served as Macon’s first “pocket park” to help alleviate the appearance of city blight. The wrought-iron fencing at the back of the park was salvaged from Rose Hill Cemetery and the columns were saved from the original Wesleyan College after it burned in 1963. The columns would often serve as a backdrop for press announcements from the label.

Capricorn Records’ reign lasted in this location until the early 1980s, when the label declared bankruptcy. In 1983, in the midst of negotiations to save the label, Fenter died of a sudden heart attack. A portion of his ashes were once kept in an urn located on the right side of the park, just outside his former office.

Less than a decade later, Walden revived the label in Nashville, then moved it to Atlanta, where it continued to operate until 2002. Among the later Capricorn artists were Widespread Panic, Gov’t Mule, Cake and 311.

Capricorn’s former executives’ office suites have remained occupied by a local law firm since the mid-1980s. The other part of the Capricorn Records office structures remained unoccupied since the bankruptcy. In 2015, the building was condemned and slated for demolition until local businessman Bryan Nichols purchased the structure and began renovations to save the historic structures. Capricorn Park remains open to the public.

The Capricorn Records offices and park are located in Macon’s Cotton Avenue District, historically known as Downtown Macon’s African American business district. H&H Restaurant is within a short walking distance to the original Capricorn Records executive offices and Capricorn Park. Other neighboring historic Macon music locations include the Macon City Auditorium and the Sidney Lanier Cottage, as well as the former site of singer Percy Welch’s hotel, where Little Richard would often stay.

Also within site of the restaurant’s iconic mushroom sign and door, look for the Duane Allman Boulevard street sign on the same side of the sidewalk along Forsyth Street. You will also find Navicent Health and just a block away, the Beverly Knight Children’s Hospital at Navicent Health, where the Jason Aldean Way street sign can be found just outside the hospital’s doors. 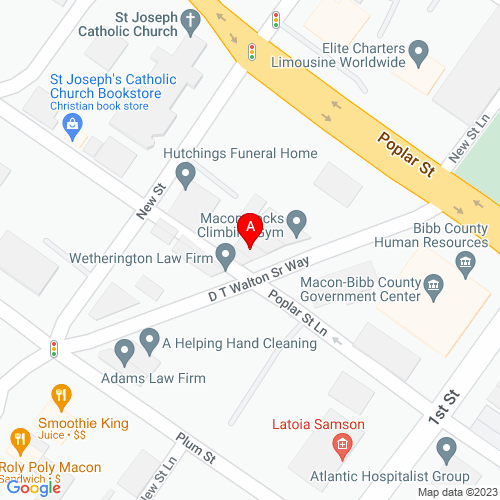