The Anchor of Macon’s Entertainment Scene.

What began as an African American vaudeville hall pioneered the way for black entertainers, created a landmark marquis casting a bright light on Macon’s music scene. From its earliest shows in the 1920s where jazz and blues legends graced the stage, to the turning point of rhythm and blues when James Brown and Otis Redding owned their performances there, the historic Douglass Theatre remains an anchor of Macon’s entertainment scene.

The Douglass Theatre is where jazz and blues legends like Duke Ellington, Ma Rainey, Ida Cox, Bessie Smith and Cab Calloway first made Macon a music town. It’s also suspected that Macon’s native pioneering woman of jazz and blues, Lucille Hegamin, got her start performing here before her own recording career soared in Chicago and Brooklyn.

Founded by Charles Douglass, Macon’s first African American millionaire, the Douglass Theatre served as a cornerstone performance venue for African Americans. It began in 1921 as a movie theater and performance hall that hosted jazz and blues greats (later, a young James Brown would perform here). It was also on the Douglass stage that local WIBB radio deejay Hamp Swain hosted “The Teenage Party,” a live talent radio show broadcast that introduced the musical gifts of a then-unknown Otis Redding, performing under the moniker “Rockhouse Redding.”

The Douglass Theatre’s run lasted from 1921 to the 1970s. It stood silent for 20 years until the City of Macon restored and reopened it in January 1997, as a state-of-the-art film, performance and meeting venue. Today the Douglass Theatre is listed on the National Register of Historic Places and continues to serve as an anchor entertainment venue. In addition to today’s live performances on its historic stage, the Douglass regularly hosts movie screenings, film festivals and live broadcast performances of the Metropolitan Opera in HD Live.

The Douglass Theatre served as the anchor of what would be dubbed the “Black Broadway of the South,” creating an African American entertainment district on what was then Broadway (now Martin Luther King Jr. Blvd.) during the South’s most segregated times. In addition to the Douglass, other nightclubs and businesses followed, including hotels and barber shops, that created a network of service support for black artists.

Today, Martin Luther King Jr. Blvd. is home to the historic Douglass Theatre, the Tic Toc Room, Visit Macon’s Downtown Welcome Center and Capricorn Sound Studios, re-launching as Mercer Music at Capricorn. Other music attractions on this street section include Fresh Produce Records vinyl record store and the Ampersand Guild. The Douglass is within easy walking distance to the Tubman African American Museum and Cherry Street Plaza, a pinnacle of Downtown Macon, complete with a set of fountains and water features. It is also within walking proximity of all Downtown restaurants and entertainment venues. 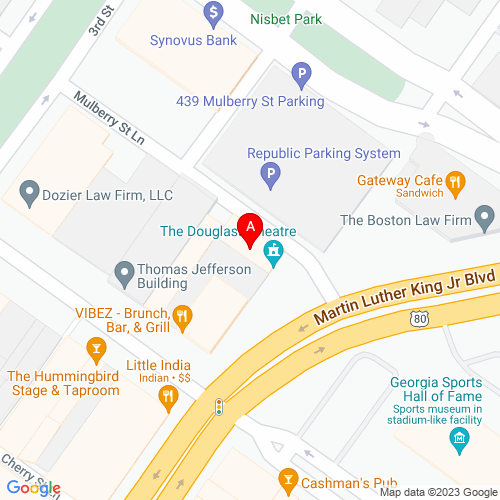