Status: Open To The Public • Closed on Sundays

The Fine Dining of Macon Music.

Today, tucked in a Downtown Macon alleyway, the Downtown Grill is one of Macon’s most elegant seafood and steak houses. But it used to be known as the famed Le Bistro. Southern music legends and celebrities like Andy Warhol, Bette Midler and Don King wined and dined at Le Bistro during Capricorn Records’ heyday. It was also here that Gregg Allman proposed to Cher in 1973.

In the early 1970s, the days when Capricorn Records launched a southern rock fairy tale-turned-true, Macon’s Downtown Grill was known as Le Bistro. It was a French eatery founded by Capricorn Records Vice President Frank Fenter and his Swedish baroness wife, Kiki. It featured the upscale cuisine of Paul Harpin, a British chef to the stars (and a favorite of Mick Jagger and others).

Among the celebrities who dined at Macon’s Le Bistro were Andy Warhol, President Jimmy Carter and the Allman Brothers Band. In fact, it was here that Gregg Allman proposed to Cher in 1973; the rest is a marriage and uncoupling made in rock n’ roll history.

Today, the Downtown Grill, owned by concert photographer and restaurateur Richie Jones, is one of Central Georgia’s most well-known, classic steakhouses. It also serves a wide selection of seafood, cocktails and even cigars. In front of its historic building, tucked in a downtown alleyway, is a Macon Music Historic Registry plaque to commemorate Gregg and Cher’s legendary engagement.

Downtown Grill is located in the Mulberry Street Lane alleyway, which runs between Second and Third Streets (enter from Second Street). Valet parking is available at the front entrance of the restaurant. Downtown Grill is located just around the corner from the Hargray Capitol Theatre and within easy walking distance of the Grand Opera House, the Macon City Auditorium, and all of Downtown Macon’s other restaurants, bars and night spots. 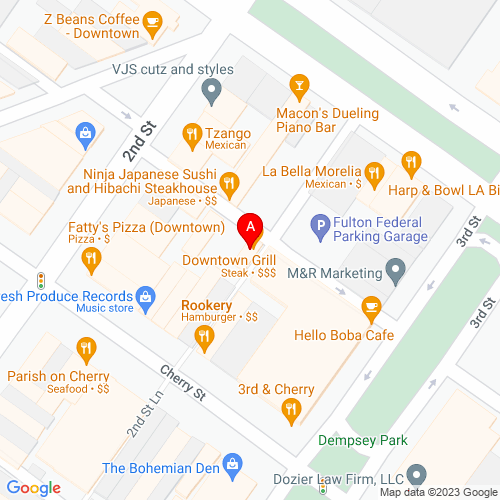