The Street Named After Skydog.

If you drive from the Big House to the H&H Restaurant, you’ll take Duane Allman Memorial Boulevard to get there. This historic part of Highway 41, found three miles along Vineville Avenue, is dedicated to the memory of Macon’s most legendary Midnight Rider, and one of the most acclaimed guitarists in American music history.

In the spring of 1998, a State resolution was passed, designating a portion of State Highway 19 (US 41) in Macon as “Duane Allman Boulevard” and a bridge thereon as “Raymond Berry Oakley III Bridge” in honor and remembrance of late founding members of the Allman Brothers Band.

In 2014, the street was re-dedicated during the Georgia Allman Brothers Band Association’s annual event in Macon, where Duane Allman Memorial Boulevard signs were revealed at the Library Ballroom, where the Allman Brothers played their first paid gig.

The easiest street sign to access for photos is just a few feet from the H&H Restaurant’s entrance, as you walk the sidewalk towards the Medical Center, Navicent Health.

Howard Duane Allman and his little brother Gregg were born and raised in Tennessee. It’s written that Gregg got a guitar for Christmas one year, while Duane got a motorcycle. Gregg learned how to play and taught Duane who, in turn, after wrecking the motorcycle, traded in the parts for a guitar of his own.

Duane became a successful session musician, hired as a full-time guitar player for the legendary Muscle Shoals studio; his signature riffs can be found on albums by the likes of Aretha Franklin, Percy Sledge and Wilson Pickett.

It was during a Muscle Shoals recording sessions that Phil Walden witnessed Allman’s guitar solo on Wilson Pickett’s version of “Hey Jude.” Walden signed Duane to a management and recording contract with his newly formed Capricorn Records.

Walden asked Duane to assemble a band, which gradually formed in Florida and later moved to Macon. Duane approached Berry Oakley, a bass player he’d met in Florida while playing with Muscle Shoals, and asked him to join the band. Oakley agreed with only one condition: that his friend, lead guitarist Dickey Betts, could join, too.

By spring of 1969, they were living all together on College Street in a two-room apartment known as the “Hippie Crash Pad.” The apartment belonged to Twiggs Lyndon, who would later serve as the band’s tour manager.

Once the Allman Brothers began touring and could afford to pay rent, Allman lived with other members of the band in the historic Tudor home lovingly dubbed “The Big House”. Now the official Allman Brothers Band Museum, you can tour the house complete with a re-creation of Duane’s bedroom, along with room after room that showcases the instruments and memorabilia from the original band and beyond.

With the Allman Brothers Band’s great success, there was repeated tragedy. On October 29, 1971, Duane was killed in a motorcycle crash shortly after the release of At Fillmore East. The accident happened on Macon’s Hillcrest Avenue. He died several hours later at the Medical Center of Central Georgia (now Navicent Health) from massive internal injuries.

Nearly one year later, bassist Berry Oakley experienced a similar motorcycle crash on Macon’s Napier Avenue, where he collided with a city bus. He initially refused medical treatment and returned home to the Big House, but it soon became evident that he was injured far worse than he believed. He was taken to the same hospital as Allman, where he died of cerebral swelling caused by a fractured skull.

Both bandmates were 24-years-old when they died. Their motorcycle accidents took place only three blocks from each other. They would later be interred side-by-side at Macon’s Rose Hill Cemetery. Today, when you travel the Duane Allman Memorial Boulevard, you cross the Raymond Berry Oakley III Bridge.

In 2003, Rolling Stone magazine ranked Duane Allman at the top of their list of the “100 Greatest Guitarists of All Time,” second only to Jimi Hendrix. His unrivaled talent combined with an intense drive and ability to draw out the best in other musicians leaves a legacy as a true American music visionary. As his epitaph reads, taken from a letter he wrote to bandmates and Big House “brothers and sisters,” at Rose Hill Cemetery:

I love being alive and I will be the best man
I possibly can. I will take love wherever
I find it and offer it to everyone who will
take it . . . Seek knowledge from those wiser . . .
and teach those who wish to learn from me.

The Boulevard and Bridge are just off the Forsyth/Hardeman Exit off of Interstate 75 and also within close proximity of the Little Richard House, located on Craft Street. Craft Street is located in Macon’s Pleasant Hill Historic District, a historic black community that developed from the 1870s. Many of Macon’s most prominent African American leaders once called Pleasant Hill home. The tight-knit community was nearly lost when the Interstate 75 bisected the neighborhood in the 1960s. 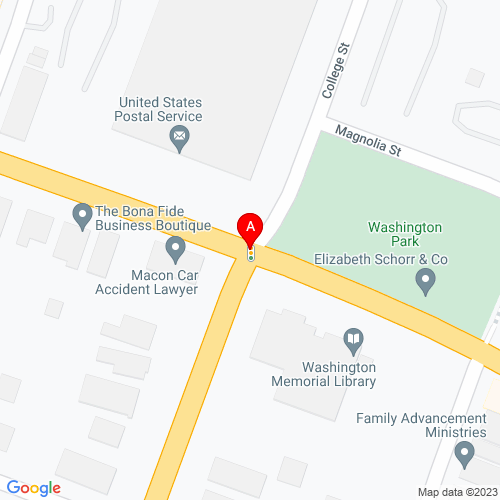