In Memory of a Macon Music Haunt.

Elizabeth Reed Music Hall is no longer in operation but the entryway still pays tribute to Macon’s music scene. This was one of the few live music venues in Macon in the 1990s and was named after an immortalized Macon woman, Elizabeth Jones Reed Napier, whose Rose Hill Cemetery gravesite served as inspiration for the Allman Brothers classic “In Memory of Elizabeth Reed.”

Formerly owned by local businessman Alan Frank, Elizabeth Reed Music Hall was previously known as Rivalry’s on Cherry before converting to its iconic name. It was here that Gov’t Mule performed its world premiere concert. Other “Liz Reeds” acts included Col. Bruce Hampton, the Aquarium Rescue Unit and 311, all of which were signed to Capricorn Records’ final comeback of that era. A young Derek Trucks also earned his career start here, playing guitar as a child prodigy with various acts.

Southern belle Elizabeth Jones Reed Napier came to Macon to attend Wesleyan College. She married Confederate Army Captain Briggs Hopson Napier. It was said the couple farmed for a living, plus they ran and operated a local pub in the early 1900s. She would later die at the age of 89 on May 3, 1935 and was interred in Macon’s Rose Hill Cemetery, among the Napier family.

The Allman Brothers frequented Rose Hill Cemetery in their early days, drawing song inspiration from the hallowed, park-like grounds. In 1970, Dickey Betts composed “In Memory of Elizabeth Reed,” inspired by the gravesite but also as an ode to a secret love affair. It was the band’s first instrumental. The original studio version appeared on the band’s album, Idlewild South and on the live album, At Fillmore East. In 2007, Rolling Stone Magazine named “In Memory of Elizabeth Reed” one of its “Fifty Best Songs Over Seven Minutes Long.”

Reed’s gravesite in Rose Hill Cemetery is located not far from the graves of Allman Brothers Band members Berry Oakley and Gregg and Duane Allman.

The former site of Elizabeth Reed Music Hall is among the sites on the Historic Macon Music Registry and a stop on a guided Rock Candy Tour.

The former site of Elizabeth Reed Music Hall is located on Macon’s main vein, Cherry Street, and can be located by its Historic Macon Music Registry plaque and signature foyer tiles. The site is located in the heart of Macon’s Downtown, near the intersection of Second and Cherry Streets. It is around the corner from the former site of Andersen’s Jewelers and the Hargray Capitol Theatre, where regular regional concerts take place. It’s just a few doors down from the Rookery and within easy walking distance to all of Downtown Macon’s restaurant and entertainment venues. 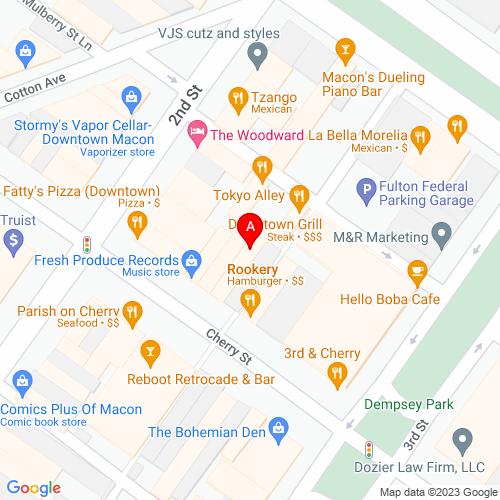