Where Legends Were Fed.

It’s a place of pilgrimage for southern music fans and musicians seeking the true soul food of this legendary meat-and-three restaurant. With original, iconic posters and promo materials lining its walls, as well as a jukebox always playing, H&H Soul Food is an essential stop for breakfast, brunch, or lunch, and those seeking a blessing from the Mama who fed them all.

The story started with its original proprietors Inez Hill and Louise Hudson, two African American women entrepreneurs who opened their humble restaurant in a former filling station. As legend goes, a group of lanky, long-haired hippies told Hudson they were hungry, but they didn’t have means to pay — yet. They were too skinny for her liking, so she fed them for free. And thus began a lifelong, loving relationship with the Allman Brothers Band. The band never forgot how their “Mama” took care of them in those early, starving artist days. And as Capricorn’s roster of artists grew, so did the musicians who called her Mama Louise.

Since then, Mama Louise Hudson has fed thousands more — some seeking her legendary fried chicken and sweet tea, others seeking her gracious blessing as the Patron Saint of Soul Food. Even in their earlier days,the Black Crowes and the Police included a stop at one of this  greasy spoon’s tables.

Today, you never know who you’ll come across dining  at the H&H. From today’s touring musicians to Capricorn veterans like Bonnie Bramlett to all other facets of the Macon community, H&H is where all walks of life come to break cornbread together.

The H&H serves breakfast, lunch and weekend brunch under the ownership of the Moonhanger Group (although Mama Louise is known to stop by and make sure her recipes remain in order). Their creative biscuit menu has taken their fabled  fried chicken to new heights, with everything from the Midnight Rider (fried chicken, bacon jam and pimento cheese) to the open-faced Red Dog biscuit (named for the Allman Brothers Band’s notorious roadie), topped with fried chicken, collard greens, poached eggs and both saw mill and red-eye gravy. In addition to their weekend brunch menu, there is also standard breakfast fare, cold plates and meat-and-three soul food lunches.

Take note that H&H is closed on Mondays, otherwise expect them open from morning until late afternoon, Tuesday through Sunday.

H&H Soul Food is located in Macon’s Cotton Avenue district, historically known as Downtown Macon’s African American business district. The restaurant includes on-site and off-street parking, as well as a nearby bike rack. H&H is within short walking distance to the original Capricorn Records executive offices and Capricorn Park. Other neighboring historic Macon music locations include the Macon City Auditorium and the Sidney Lanier Cottage, as well as the former site of singer Percy Welch’s hotel, where Little Richard would often stay.

Also within site of the restaurant’s iconic mushroom sign and door, look for the Duane Allman Boulevard street sign on the same side of the sidewalk along Forsyth Street. You will also find Navicent Health and just a block away, the Beverly Knight Children’s Hospital at Navicent Health, where the Jason Aldean Way street sign can be found just outside the ER’s  doors. 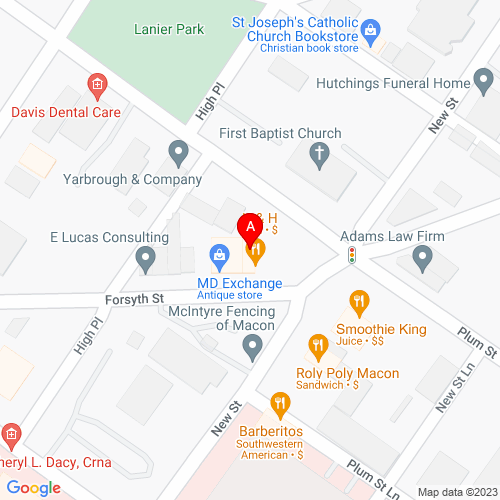