Some of the most fascinating, unsung stories of Macon music history are interred at Historic Riverside Cemetery. Located adjacent to Rose Hill Cemetery, this privately operated historic cemetery is the final resting place of over 18,000 people including Civil War veterans, esteemed civic and business leaders, renowned educators, religious leaders of several faiths, members of the Military and prominent Macon families.

Riverside Cemetery, located on a bluff above the Ocmulgee River, is considered a cultural landmark, filled with sculptures and monuments. When it comes to Macon music history, the non-profit Riverside Cemetery Conservancy continues to uncover stories associated with those interred throughout its 125 acres of serene green space. By highlighting the history of the community builders, musicians, teachers, athletes, ministers, public servants, homemakers, aviators, and others, the Conservancy is committed to offering visitors a deep connection to Macon’s past and present community through special events, educational and service opportunities.

Year-round events and programs entertain and educate the public and preserve the cemetery’s historic relevance to modern culture. This includes signature “spirit strolls” featuring costumed actors portraying some of the most interesting stories found among the graves.

Riverside’s website has a burial records database that allows you to research genealogy data, burial plots and obituaries of those interred on its grounds.

Twiggs Miller Lyndon, Jr.: The famed road manager of the Allman Brothers Band, Lyndon lived a life of southern music triumph, fable and tragedy. A trusted employee who worked as a road manager for many of Phil and Alan Walden’s soul acts, Lyndon welcomed the newly formed Allman Brothers Band to crash in his two-room apartment on College Street. His devotion to the band was a tie that bound their legendary Brotherhood. He would eventually face the courtroom and plead guilty by reason of temporary insanity for the stabbing death of a New York club owner who owed the band money. Later, he would discover and serve as the road manager for Capricorn band, the Dixie Dregs. It was on tour with the Dregs that Lyndon, an avid skydiver, met up with a group of skydivers in upstate New York to participate in a choreographed formation dive. He died when his chute did not properly deploy.

Clemiel Barto “C.B.” Walden: The father of Phil, Alan and their oldest brother Clark Walden was an essential figure in both the career of his sons and Otis Redding. Although he didn’t initially approve of his sons’ foray into the music business, he experienced a change of heart after meeting Redding. He would go to work as an executive of RedWal Music Company and a beloved road manager of both Redding and Percy Sledge. It was Redding who gave him the moniker “Pops” Walden, and it was widely known that Pops loved Redding like his own son.  Walden would travel the world with the rhythm and blues artists signed to his sons’ agencies and serve as a protective advocate of their financial interests and treatment as black artists in a segregated south.

John Mark Heard, III: Originally from Macon, Mark Heard was a critically acclaimed songwriter, folk singer and record producer who released 16 albums and produced and performed with other critically acclaimed artists like Sam Phillips (a.k.a. Leslie Phillips), Pierce Pettis, Phil Keaggy, Vigilantes of Love, Peter Buck of R.E.M. (who co-produced VOL’s album Killing Floor with Heard), John Austin, The Choir, Randy Stonehilland Michael Been of The Call. Heard produced part of Olivia Newton-John‘s The Rumor, which also included a cover of Heard’s own “Big and Strong.” He is considered a songwriting pioneer in both contemporary Christian, folk and mainstream music. On July 4, 1992, he had a heart attack on stage while performing. Heard finished his set and went to the hospital immediately afterwards. Two weeks after being released from the hospital, Heard went into cardiac arrest and died on August 16 of 1992. Over a decade after his death, Heard won “Song of the Year” at the 2005 Americana Music Awards for Buddy Miller’s version of the song “Worry Too Much.”

Riverside Cemetery and Conservancy is located off Riverside Drive, within short proximity to Downtown Macon. Rose Hill Cemetery and Riverside Cemetery are adjacent but have separate entrances. Both cemeteries are within walking distance from the original “Hippie Crash Pad” site of the Allman Brothers, located next door to the McDuffie Center for Strings. The Allman Brothers often walked from their apartment in the “Crash Pad” to Rose Hill Cemetery for song inspiration. Also nearby is the Pleasant Hill Neighborhood, where Little Richard was raised. 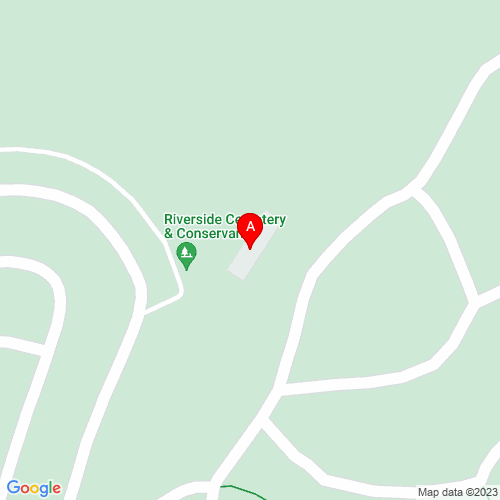