Where We Know He Was Here.

Just outside the Beverly Knight Olson Children’s Hospital you can drive along Jason Aldean Way, a portion of Pine Street renamed for Macon’s most recent music superstar to climb the charts. Pose for a picture under the namesake sign, which sits at the crosswalk leading to the entrance of the Navicent Health Emergency Room on Pine Street.

In 2016, Aldean played a homecoming benefit show in Macon which raised half a million dollars for the local children’s hospital, which was being renovated at the time. In 2017, in appreciation of his efforts, the street was renamed in his honor. Aldean and his family returned to Macon for the unveiling. Since then, Aldean has returned to perform two additional benefit concerts and has raised over $1.2 million for the Beverly Knight Olson Children’s Hospital at Navicent Health.

Macon native Jason Aldean was born Jason Aldine Williams in 1977. Aldean would graduate from Macon’s Windsor Academy in 1995, where he spent his youth playing baseball and guitar, as well as developing his early talent as a singer.

At the age of 14, he began playing at Macon’s local VFW Hall (Veterans of Foreign Wars) and area talent contests. Just a year later, he joined the house band of Macon’s Nashville South and began pursuing music as a full-time career. With his father as his booking agent, Aldean started playing bars and small venues all around the Southeast.

In 1998, Aldean moved to Nashville, where he experienced the ups and downs of Music Row. Just as things looked like he’d return home, he got his big break with Broken Bow Records resulting in his first self-titled album, released in 2005. Featuring hits like, “Hicktown” and “Why,” Aldean went from an unknown artist to record-breaking hitmaker.

In 2015, Aldean returned to his stomping grounds of Windsor Academy and Downtown Macon to record video for his song “Gonna Know We Were Here,” which also featured appearances by local participants. A portion of the video was recorded at the intersection of Cotton Avenue and Second Street, in front of the Civil War memorial statue. Guided Rock Candy Tours point out the location.

Jason Aldean Way is part of the surrounding networks of streets at Navicent Health, the second-largest hospital in Georgia and the only designated Level I Trauma Center in the region. The most visible street sign is just outside the Beverly Knight Olson’s Children’s Hospital, as a portion of Pine Street.

Within a short walking distance of the street sign is Duane Allman Boulevard and H&H Soul Food. H&H Soul Food is located in Macon’s Cotton Avenue district, historically known as Downtown Macon’s African American business district. The restaurant includes on-site and off-street parking, as well as a nearby bike rack. H&H is within a short walking distance to the original Capricorn Records executive offices and Capricorn Park. Other neighboring historic Macon music locations include the Macon City Auditorium and the Sidney Lanier Cottage, as well as the former site of singer Percy Welch’s hotel, where Little Richard would often stay. 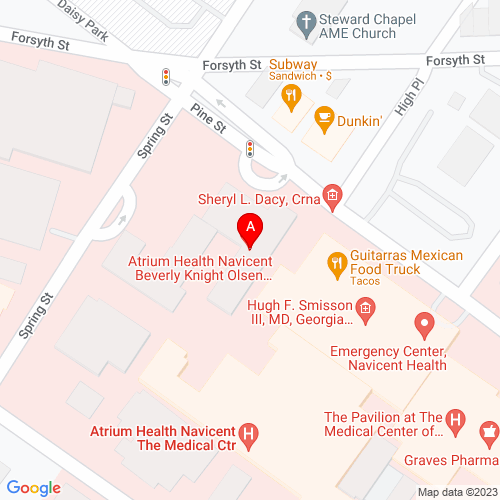