Status: Open To The Public For Special Events

Where the Allman Brothers Band Began.

Then known as the College Discotheque, this was once the location of the hottest ticket in town; The only problem was ticket sales were slow because nobody had heard of the headliner. Now the Library Ballroom, this historic building was the site of the Allman Brothers Band’s first ticketed performance, where tickets were $1.50 at the door and the band was described as an “experimental blues rock music feast.”

The original concert poster promoted the band as a, “newly formed underground blues-rock group from Florida,” now working out of Macon. The poster went on to proclaim, “These six members comprise the most inventive experimental blues-rock group in existence today. Prepare your mind to be musically educated as you experience THE ALLMAN BROTHERS.” It was a two-night run, starting Friday, May 2, 1969, from 8 p.m. until midnight.

Earlier that year, Duane Allman had signed a management and recording contract with Phil Walden and his newly formed Capricorn Records. This was after Walden witnessed Allman’s guitar solo on Wilson Pickett’s version of “Hey Jude” in a Muscle Shoals recording session.

By the spring of 1969, they were living all together on College Street in a two-room apartment known as the “Hippie Crash Pad.” The apartment belonged to Twiggs Lyndon, who would later serve as the band’s tour manager.

Two years from their ticketed debut, the band would release At Fillmore East, which critics consider to be one of the best live albums ever made. After that, every show in Macon — as well as countless other concert venues across the globe — would sell-out the moment tickets went on sale.

The Allman Brothers lived in Macon for the next decade, contributing to the cultural fabric and southern rock folklore of the local community.

The Library Ballroom was originally constructed in 1889 to house Macon’s first public library (among other things it was also home to a coffin shop). It became the College Discotheque in the 1960s, where many bands played, in addition to the Allman Brothers. Eventually, the ballroom fell into disuse, but was later acquired by the Historic Macon Foundation after it faced demolition in the 1990s. More recently, the building was purchased by Tony Widner, of Widner & Associates, Inc., who performed a complete renovation to restore the building to its original beauty.

There are multiple historic plaques outside the Library Ballroom’s entrance. Today, it is used as a private event facility, as well as a public concert venue. In addition to marketing its music significance by both the Historic Macon Music Registry and the Georgia Allman Brothers Band Association, the Library Ballroom is on the National Register of Historic Places.

The Library Ballroom is located in the heart of Downtown Macon’s business and entertainment districts. Directly across Mulberry Street is the Grand Opera House, a cultural and historical landmark that was once saved from demolition through a fundraiser headlined by the Allman Brothers Band. The Mulberry Street location is also home to the Macon-Bibb County Courthouse and is within walking distance to numerous bars and restaurants, art galleries and pre- and post-show events. Other music landmarks found within close proximity include the Robert E. Lee Building, the Hargray Capitol Theatre, Downtown Grill, the Otis Redding Foundation, Anderson’s Jewelers and the Macon City Auditorium. 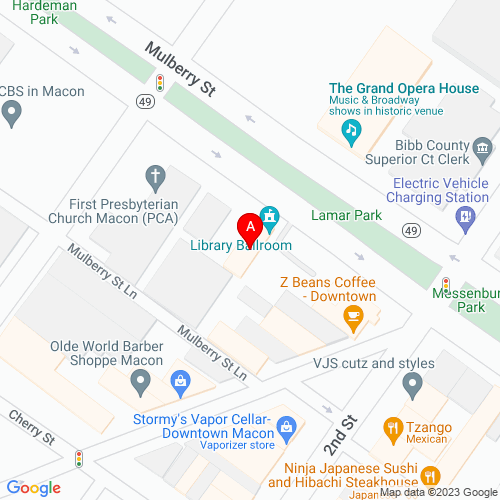