Status: Open To The Public By Appointment

Where the Architect of Rock Was Raised.

This small, shot-gun style home is where a young Richard Wayne Penniman lived on and off throughout his youth as the third of 12 children. The house was saved from Interstate expansion and moved one mile to its current location, where it serves as a community resource center and tribute to one of Macon’s most famous native sons, Little Richard, who would catapult his way to legendary status as the pioneering “Architect of Rock n’ Roll.”

Richard Wayne Penniman grew up in Macon’s Pleasant Hill neighborhood and lived at this house on and off during his youth, until his hit “Tutti Frutti” was released in 1955. From there, he went on to be known as the “Architect of Rock n’ Roll, ” defining the early rock n’ roll era.

Like many Macon artists, Penniman got his start singing and playing piano in the Church. His grandfather was a preacher, and it’s written his own father was a Deacon by day and bootlegger by night. His father was later shot and killed outside the Tip Inn In bar in Pleasant Hill.

As a young boy, Penniman performed with two gospel groups, the Tiny Tots and the family’s Penniman Singers. During his childhood, he experienced fate when gospel troubadour Sister Rosetta Tharpe pulled him on stage at the Macon City Auditorium to perform. This moment fueled his desire to live the rest of his life as a musician and entertainer, despite the poverty, perceptions and prejudices to which he was often subjected.

Born with one leg shorter than the other and a noticeable limp, Penniman was also known to have a flamboyant flair, even as a child. These antics often got him teased or in trouble with the church, his family and authorities. But as a young teen, he soon put it all to good use when he began his pioneering performances under the moniker “Little Richard.”

When he wasn’t performing, he was washing dishes. Among his employers were Ann Howard, owner of the Tic Toc Lounge restaurant and nightclub. It’s also said that “Miss Ann” would allow a young Penniman to live at her house when he didn’t have anywhere else to stay.

Penniman earned his first big break after a performance on an Atlanta radio station led to a recording contract, but it soon became clear that the music business wasn’t sure how to receive his signature shrill and piano-pounding sound.

It wasn’t until 1955 that Penniman found himself in New Orleans with Specialty Records, where he went into a recording studio and came out with “Tutti-Frutti,” an instant hit that surged up the charts.

Other hits would soon follow, including “Long Tall Sally” and “Good Golly Miss Molly,” both songs recapping Macon’s influence in their suggestive lyrics. Penniman became established alongside his fellow groundbreakers like Elvis Presley and Jerry Lee Lewis and became an influence to the Beatles.

In addition to his hit records, Penniman appeared in film projects, sold out shows and became known for his unique style of musicianship all over the globe. But in 1957, after a world tour performance in Australia, Penniman abruptly quit performing the music he was known for and switched to recording gospel songs. Due to his abrupt exit from rock n’ roll, James Brown stepped up to complete Penniman’s world tour.

Penniman recorded his debut religious album God Is Real in 1959. He also entered Oakwood College in Huntsville, Alabama, earned a degree in theology, and was ordained as a minister in the Seventh Day Adventist Church. To this day, because of his faith, he never performs from sundown Friday until sundown Saturday.

Still, about five years later, Penniman returned to the music he defined for so many artists to follow. In 1986, Little Richard was one of the original inductees into the Rock and Roll Hall of Fame. Although he never returned to Macon full-time after his career took-off, he has never hesitated to proudly proclaim where he comes from.

In the 1990s, a portion of Mercer University Drive was renamed Richard Penniman Boulevard. In May 2013, he returned to Macon where he was awarded an Honorary Doctorate of Humanities from Mercer University. Around this same time, the childhood home on Fifth Avenue was acquired by the Department of Transportation and the process began to relocate and renovate the property to Craft Street as a tribute to him. The house was moved in April 2017 to its current location, where plans were announced to convert it into a community resource center, coinciding with Penniman’s 85th birthday.

Today, the Little Richard House is dedicated to the Pleasant Hill Community as a resource center offering services such as technology training, job preparation, resumé and cover letter assistance, career pathways and much more. It also pays tribute to Little Richard’s life once lived there, who said via a phone call at the celebration of the house’s restoration: “I thank y’all for loving me through the years, and I still love y’all. Thank you for everything you’ve ever done for my old house. That old house has a lot of Tutti Frutti, aw rutti.”

The Little Richard House is located in Macon’s Pleasant Hill Historic District, a historic black community that developed from the 1870s. Many of Macon’s most prominent African American leaders once called Pleasant Hill home. The tight-knit community was nearly lost when Interstate 75 bisected the neighborhood in the 1960s.

Today, you can access the Little Richard House on Craft Street off of Vineville Avenue, closest to the Forsyth/Hardeman exit ramp at I-75.

Not far from the Little Richard House is the Allman Brothers Band Museum at the Big House. This is located in the historic Midtown area of Macon known as the Vineville Historic District. A portion of Vineville Avenue (also Hwy 41), where the Big House is located, was re-named in memory of Duane Allman as Duane Allman Boulevard. In further tribute, Duane Allman Boulevard crosses the Raymond Berry Oakley III Bridge, named in memory of bassist Berry Oakley. This honorary connector leads to nearby Downtown Macon. 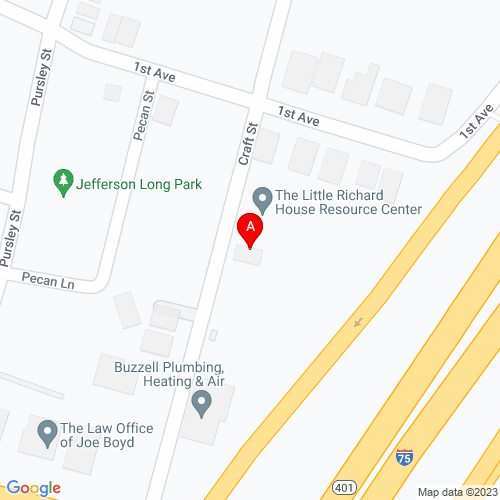