Built to commemorate the 100-year anniversary of Macon’s founding, the City Auditorium is a classical landmark venue that has witnessed some of the most historic concert performances and events in the city’s rich music history. It remains Macon’s municipal auditorium and a premier performance venue, hosting national touring artists, events and community performances, where touring acts play the same stage once graced by legends like Little Richard, Otis Redding, James Brown and the original Allman Brothers Band.

Completed in 1925 and added to the National Register of Historic Places in 1971, the Parthenon-like Macon City Auditorium has been a mainstay in the city’s music scene for almost one hundred years. Some of the most notable concerts are the homecoming shows of James Brown, Otis Redding and The Allman Brothers Band.

Designed by New York architect Egerton Swartwout, the Auditorium features a balcony level hemmed in on three sides by Doric limestone columns. Topping the building is a stunning copper domed roof, believed to be the largest in North America. A mural painted by Don Carlos DuBois and Wilbur Kurtz is featured above the stage, depicting Macon’s history from explorer Hernando DeSoto’s visit in 1540 to the WWI-era cantonment of Camp Wheeler.

In the late 1940s, during a gospel performance by guitar-wielding troubadour Sister Rosetta Tharpe, an unknown Little Richard (then a young teenager), was pulled up on stage to perform alongside her — starting his own journey as a musician and performer.

The Auditorium was also the site of Otis Redding’s original — and final — homecomings. In addition to hosting his sell-out annual concerts, it is also where his memorial service was held following the plane crash that killed him at age 26.

The Auditorium is a true Macon landmark, on the corner of Downtown’s First and Cherry Streets. A Historic Macon Music Registry Plaque is found on the First Street side of the building commemorating Little Richard, James Brown and Otis Redding.

Today, the Macon City Auditorium is an essential tour stop for many nationally touring artists, from Gladys Knight to Bob Dylan, Willie Nelson and Jason Isbell and the 400 Unit. But it’s not just an acclaimed, historic concert venue – it was also the studio filming site for Oprah Winfrey’s famous “Favorite Things” episode in 2007.

About the Surrounding Geography

The Macon City Auditorium is located in Downtown Macon on First Street next door to Rosa Parks Square, a small greenspace in the middle of the city used for small community gatherings, festivals and events. The Auditorium is next door to Macon’s City Hall (Government Center) and just a short walk from Downtown Macon’s vibrant restaurant and entertainment scene, and only steps away from other Macon music sites like the original Capricorn Records Office, H&H Restaurant, Otis Redding Foundation, Downtown Grill, The Rookery and Grant’s Lounge. 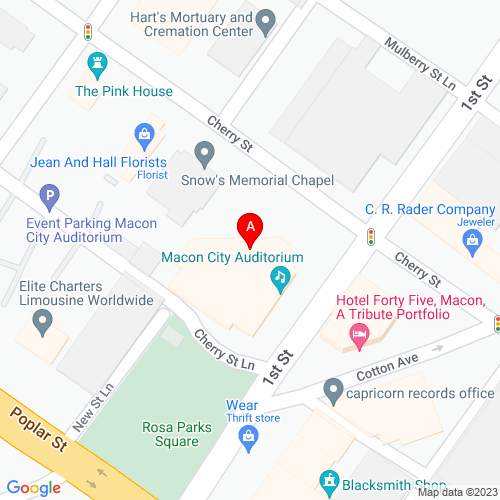