The Macon Coliseum is a multi-purpose arena equipped for stadium concerts, large-scale productions and sporting events. It’s hosted some of the biggest tickets in Macon’s history and remains a noted stop on major tours today. Countless sold-out arena acts have performed at the Macon Coliseum, including Led Zeppelin, Lynyrd Skynyrd, Elton John and Elvis Presley, who died two months after his final Macon show.

At the time of its completion in 1968, the Macon Coliseum was the first facility of its size and kind in Georgia. It quickly became a premier venue for sports and large music tours. With a 9,000-plus concert capacity and just a two hour drive (or less) from two-thirds of the State’s population, the Coliseum continues to be a leading stop in entertainment and culture.

From the King of Rock n’ Roll, Elvis, to the Architect of Rock n’ Roll, Little Richard, to year-round sporting events, sold-out arena tours and even major blockbusters looking to film in Macon, the Coliseum continues to bring larger than life events to the region, adding dual usage with its attached convention space.

In its early days the Coliseum saw performances from Led Zeppelin, James Brown and Elvis Presley. Most recently it has also been graced by Elton John, Keith Urban, Mary J. Blige, Widespread Panic and Little Richard. Not to mention its recent blockbuster cameo in the award-winning film I, Tonya.

Hosting some of the most legendary acts in music history makes up the Coliseum’s interesting history. In fact, Elvis performed five times at the Coliseum, from 1972 until 1977. Backstage at his April 24, 1975 concert, Elvis was presented with a key to the city and a Certificate of Honorary Citizenship by then Mayor Ronnie Thompson. He joked on stage that night, “My name is Johnny Cash . . . it’s a pleasure to be back here in Atlanta, uh, Macon.” The concert in its entirety was recorded live from the Coliseum’s sound board and released as part of the From Vegas to Macon set. It was later re-released as In the Heart of Georgia.

Presley played his last show in Macon at the Coliseum on June 1, 1977. Two months later, he died at the age of 42 in Memphis, TN.

Lynyrd Skynyrd has also played the Macon Coliseum on numerous occasions, but one of the band’s most significant moments actually happened in the Coliseum’s parking lot: in the early 1970s, the band signed their recording contract with MCA Records on the hood of their manager Alan Walden’s car.

About the Surrounding Geography

The Macon Coliseum sits in a prime location near the convergence of major Interstates I-16 and I-75 and is connected to the Macon Marriott City Center and Edgar H. Wilson Convention Center. It is within a short drive or bike ride to the Ocmulgee Mounds National Historical Park or a trip across the Otis Redding Memorial Bridge to Downtown Macon and the Otis Redding Statue. 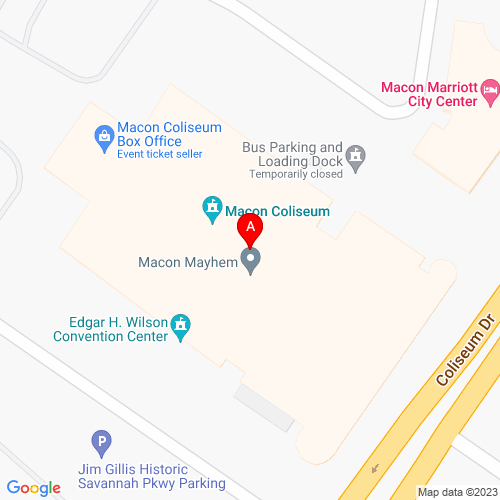