The Birthplace of Southern Rock.

The former Capricorn Sound Studios has been fully restored as Mercer Music at Capricorn, offering two recording studios, a music incubator for aspiring young musicians and an interpretive area that tells the story of Capricorn and Macon’s music heritage through historic artifacts, static exhibits and interactive digital kiosks.

Built in 1969, this premier recording studio was created by Capricorn Records to capture the hotbed of music coming from the South. Not just limited to the label’s own roster of artists, the studio opened its doors to a variety of musicians who recorded here, including the Allman Brothers Band, the Marshall Tucker Band, the Charlie Daniels Band, Wet Willie, Percy Sledge, Bonnie Bramlett, Dexter and Otis Redding III and many more.

As documented by Mercer Music at Capricorn, Capricorn Sound Studios is most closely associated with the Allman Brothers Band, which recorded significant portions of three albums there, as well as Gregg Allman’s solo album Laid Back in 1973 and Dickey Betts’s solo album Highway Call in 1974. Led by Duane and his brother Gregg, Southern boys who had grown up in Florida, the Allman Brothers became so huge that even Duane’s death in a 1971 motorcycle accident didn’t derail the band. Their success made Macon ground zero for Southern Rock. Capricorn, then operating out of the Cotton Avenue office downtown, was the genre’s signature label.

As the success of the touring artists rose, the label needed a studio in Macon and found a location in the real estate that Redding and Walden had purchased a few years earlier. By the mid-1970s, the headquarters of Capricorn Records included executive offices on Cotton Avenue and the active recording studio on what is now Martin Luther King Jr. Boulevard. The recording studio is the physical space that captured and defined the 1970s Southern Rock sound with a roster of talented artists who would become legends.

Capricorn is one of only a few studios in the country that can claim to have produced music that had a uniquely transformative impact on American culture. Capricorn is the place where influences from blues, soul, rockabilly and country blended into a new musical genre — southern rock. This pioneering sound in the 1970s placed Capricorn among a small group of transformative studios developing new musical styles, including RCA’s Studio A in Nashville where the “Nashville Sound” emerged; Chess Records in Chicago, which popularized “Electric Blues;” FAME in Muscle Shoals, known for its production of “Southern Soul;” Motown Records in Detroit, which created the “Motown Sound” of soul music; and Stax in Memphis, where Redding originally recorded.

While Capricorn is closely associated with its impresario, Macon native and Mercer graduate Phil Walden, Walden’s brother Alan also made an impact on the historic building. After the launch of Capricorn Records, Alan Walden left the company and formed his own music management and publishing company, Hustlers Inc. on April 1, 1970. Hustlers would eventually operate out of the adjacent building (548 Martin Luther King, Jr. Blvd.) to his brother’s studio.

The first act signed to Hustlers was the then-unknown Lynyrd Skynyrd. Hustlers published songs such as “Freebird,” “Sweet Home Alabama,” “Simple Man” and more. Although Capricorn was among the labels that turned down Skynyrd, Alan continued to believe in the band. With the two brothers working with two of the biggest bands of that era, one of the biggest rivalries in southern rock brotherhood was formed. It would all come full circle in 1974, when the Allman Brothers and Lynyrd Skynyrd shared the bill at the Fulton County Stadium.

Alan would later discover and manage the Outlaws Band, which had the southern anthem hit “Green Grass and High Tides.” During this time, Alan continued working out of his adjacent building long after Capricorn’s closure. His building would later include a loft apartment and Alleysound Recording Studio. He commissioned artist Michael Pierce to paint murals throughout his building and held legendary parties and events on its upstairs stage, long after Macon music’s heydey.

In the late 1990’s, a fire nearly destroyed the entire block of these properties. Alan and other local residents rushed to save decades of gold and platinum record citations and archives of recordings from the impending smoke and flames. Fortunately, his building and the historic studio building survived, while the rest of the block was destroyed around them.

After decades of historic records being crafted in the pitch perfect sound room of Studio A, as well as financial ups and downs, the location of the historic Capricorn Sound Studios was finally shuttered in the early 2000s, and has sat vacant ever since. Alan would ultimately sell his building in 2000, whereafter it would change ownership multiple times and suffer neglect. In 2010, the Georgia Trust named these former music structures as one of the Top 10 Places in Peril in the State.

But Capricorn has risen from the ashes. The fire that ravaged the surrounding buildings and nearly destroyed Capricorn Studios would ultimately create an opportunity for Downtown Macon to revive this culturally significant property by creating room for new development. Mercer, NewTown Macon, Sierra Development and Southern Pine Plantations announced in December 2015 a partnership to bring back to life the historic Capricorn Studio as part of the largest market-rate residential development in the history of downtown Macon. Today, the Lofts at Capricorn, a newly constructed, mixed-use retail and residential development, surround and support the historic structures, which were then donated by the developers to Mercer University.

Through an innovative partnership with Mercer University, Studio A is being restored, and the vast openness of what is three buildings are being converted into practice spaces and office spaces. Not to mention a digital museum like none other in America (it will host every song ever recorded on that label) which will be the feature visit. The original studio, equipped with state of the art analog and digital recording equipment, is accessible to the public, as are the practice spaces, in an attempt to incubate the next round of Macon music to change the face of the region and the sound of a country.

Through Mercer Music at Capricorn, Mercer has put a historically important facility back to work, not just as a museum, but as a tool to advance a vibrant music scene. The goal of the project is to leverage Macon’s rich, nationally important music heritage to shape Macon’s music future. Mercer Music at Capricorn will have a music incubator for aspiring young musicians, restored and expanded recording studios, offices for arts-related non-profits such as Macon Film Festival, Bragg Jam, and Macon Pops, and space for small concerts. It will also house space for special events, educational programs through Mercer’s Townsend School of Music, and a two-story interpretive area that tells the story of Capricorn and Macon’s music heritage through historic artifacts, static exhibits and interactive digital kiosks featuring music, video and text. The digital component includes a robust website to enable people who cannot travel to Macon to experience the story of Macon’s music heritage and the impact it had on American culture. It will also curate a community-sourced musical archive that will collect stories from the public by allowing users to upload their own photos, videos and stories.

This is a current stop on guided Rock Candy Tours  and public tours are available. For tour hours, visit Mercer Music at Capricorn.

Mercer Music at Capricorn is just a few blocks away from the Douglass Theatre, on the “Black Broadway of the South,” an African American entertainment district on what was then Broadway (now Martin Luther King Jr. Blvd.) during the South’s most segregated times. In addition to the Douglass, other nightclubs and businesses followed, like Ann’s Tic Toc Lounge, as well as hotels and barber shops, that created a network of service support for black artists.

Today, Martin Luther King Jr. Blvd. is home to the historic Douglass Theatre, the Tic Toc Room, Visit Macon’s Downtown Welcome Center and the historic site of Capricorn Sound Studios, re-launching as Mercer Music at Capricorn. Other music attractions on this street section include Fresh Produce Records vinyl record store and the Ampersand Guild. Also within easy walking distance are the Tubman African American Museum and Cherry Street Plaza, a pinnacle of Downtown Macon, complete with a set of fountains and water features (and available parking). It is also within walking proximity of all other Downtown Macon restaurants and entertainment venues. 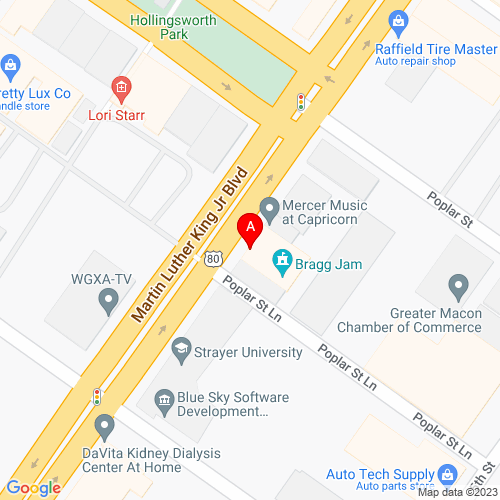