A Tribute to the King of Soul.

(The statue has been temporarily removed. A new location is to be announced soon.)

The bronze life-size statue of Otis Redding sits overlooking the Ocmulgee River, adjacent to the Otis Redding Memorial Bridge. It’s here you can take a picture and a peaceful moment with his legendary likeness, pay your R-E-S-P-E-C-T to his forever young life and hear his familiar music drifting over the river through outdoor speakers.

Born in Dawson, Georgia, Otis Redding, Jr. and his family moved to Macon when he was a young child. The son of a minister, his career as a singer and musician began in the church choir. He attended Macon’s Ballard Hudson High School and participated in the school band. As a teenager, he began to compete in the Douglass Theatre talent shows, winning consistently until he was no longer allowed to compete.

Otis was also a singing member of Johnny Jenkins and the Pinetoppers before launching his solo career. It was in Macon where he met his manager, a young Phil Walden, who was building a business as a booking agent for R&B acts. Together, they worked to launch Phil Walden Artist & Promotions, a trusted management and booking agency for R&B artists, like Redding, who were racially integrating mainstream music and its audiences.

As Redding’s trajectory began, Walden had recently graduated from Mercer University and was commissioned as a second lieutenant in the U.S. Army through a deferred service program. Walden recruited his younger brother Alan, then a sophomore at Mercer, to join the company and co-manage Redding in his absence, while he served in Germany.

Upon Walden’s return, Redding was climbing the charts and blazing a tour schedule that would lead to arenas, the Apollo, overseas and eventually the turning point Monterey Pop Festival.

By 1965, Redding and the Walden brothers co-founded the Redwal Music Company that would not only help launch the career of Redding but other R&B artists like Percy Sledge, Sam & Dave and more. This unlikely business partnership, which happened during a time of deep-seated southern segregation, opened the door for a soul music movement, which changed the course of American music. Its  influence can still be heard today.

Redding’s “Pain in My Heart” and “These Arms of Mine,” followed by additional songs like “Try a Little Tenderness,” “I’ve Been Loving You Too Long,” “I’ve Got Dreams to Remember,” “Shake,” “Mr. Pitiful,” “FaFaFa,” “Love Man,” “Respect,” covers of “Hard to Handle” and “Satisfaction,” and so many more, paved his way to legendary stardom as the King of Soul and one of America’s greatest music exports.

But Redding wouldn’t live long enough to witness his biggest hit. His life was tragically cut short at the age of 26 when the twin-engine airplane, carrying him and most of the members of the backing band, the Bar-Kays, crashed on December 10, 1967 on the way to Madison, Wisconsin.

The song he recorded days before the crash, “Dock of the Bay,” would become a blockbuster hit for Redding, and was released just a month after his tragic death. The song has since sold millions of copies, won two posthumous Grammy awards and become an instant classic and signature song of Redding’s.

Today, you can feel the energy of Redding’s lasting impact when you visit the Otis Redding Foundation headquarters, hear lessons taking place at the adjacent Otis Redding Center for Creative Arts, or attend any of the inspiring public performances by Otis Music Camp students. Together with  their music mentors, coaches and Redding family members, they’re continuing what Redding started, right here in Macon, Georgia.

About the Surrounding Geography (The statue has been temporarily removed. A new location is to be announced soon.)

The Otis Redding Statue is adjacent to the Otis Redding Memorial Bridge, which stretches across the Ocmulgee River and connects to the Phil Walden Memorial Interchange, just off the exit and entrance ramps to I-75 and I-16. The statue is located in the public Gateway Park, which is part of the Ocmulgee Heritage Trail network. On-street parking is available along Riverside Drive and the site can also be accessed from the Ocmulgee Heritage Trail by bike or foot. This area is a gateway leading into Downtown Macon, where the Otis Redding Foundation is located on Cotton Avenue, a little less than one mile from the statue site. 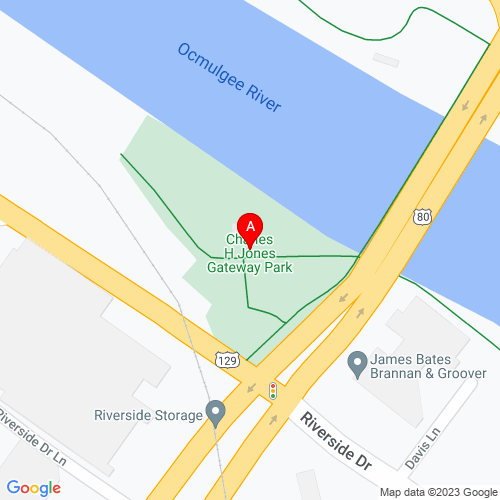