The Connector of Allman Brotherhood.

When you drive down Highway 41 at Forsyth Street, also known as Duane Allman Boulevard, you’ll cross the Raymond Berry Oakley III Bridge. The two street signs placed on either side of the bridge, spanning Interstate 75, pay tribute to the iconic bass player and founding member of the Allman Brothers band, who died at the height of his music career, almost one year after bandmate Duane Allman’s fatal, mirror-image motorcycle crash.

The memorial bridge crosses over the interstate, connecting the pathway from the Big House on Vineville Avenue, where Oakley lived, to Downtown Macon, where the Allman Brothers thrived.

In spring 1998, a State resolution was passed, designating a portion of State Highway 19 (US 41) in Macon as “Duane Allman Boulevard” and a bridge thereon as “Raymond Berry Oakley III Bridge” in honor and remembrance of late founding members of the Allman Brothers Band.

Born and raised in Illinois, Oakley began as a lead guitar player, but later found himself in Florida, filling in as a bass player for a friend’s band. While his friend’s band didn’t last, Oakley’s love for the bass did, and when he was approached by Duane Allman to join a new act he was forming, Berry agreed with only one condition: that his friend, lead guitarist Dickey Betts, could join, too.

Once the Allman Brothers began touring and could afford to pay rent, Oakley and his family (including his young daughter, wife and sister) lived with the other members of the band in the historic Tudor home lovingly dubbed “The Big House”. Now the official Allman Brothers Band Museum, you can tour the house and see Oakley’s daughter Brittany’s childhood bedroom, perfectly restored. Her closet even includes the actual dress she wore on the back cover of the Brothers and Sisters LP.

With the Allman Brothers Band great success, there was repeated tragedy. Guitarist Duane Allman was killed in a motorcycle crash shortly after the release of At Fillmore East. The accident happened on Macon’s Hillcrest Avenue on October 29, 1971. He died several hours later at the Medical Center of Central Georgia (now Navicent Health) from massive internal injuries.

One year later, almost to the day, Oakley experienced a similar motorcycle crash on Macon’s Napier Avenue, where he collided with a city bus. He initially refused medical treatment and returned home to the Big House, but it soon became evident that he was injured far worse than he believed. He was loaded into new bandmate Chuck Leavell’s station wagon and taken to the same hospital as Allman, where he died of cerebral swelling caused by a fractured skull.

Both bandmates were 24-years-old when they died. Their motorcycle accidents took place only three blocks from each other. They would later be interred side-by-side at Macon’s Rose Hill Cemetery.

Today, Oakley is recognized as a groundbreaking bass player. His iconic bass riffs, like the introduction to “Whipping Post,” provided backbone and weight for the intricate guitar melodies of Betts and Allman. Though his career was devastatingly short, Oakley’s impact on the landscape of southern rock continues to influence musicians today.

The Bridge and Boulevard are connectors between Downtown Macon and the Historic Vineville Neighborhood District. They are just off the Forsyth/Hardeman exit off of Interstate 75 and also within close proximity to the Little Richard House, located on Craft Street. Craft Street is situated in Macon’s Pleasant Hill Historic District, a historic black community that developed from the 1870s. Many of Macon’s most prominent African American leaders once called Pleasant Hill home. This tight-knit community was nearly lost when Interstate 75 bisected the neighborhood in the 1960s. 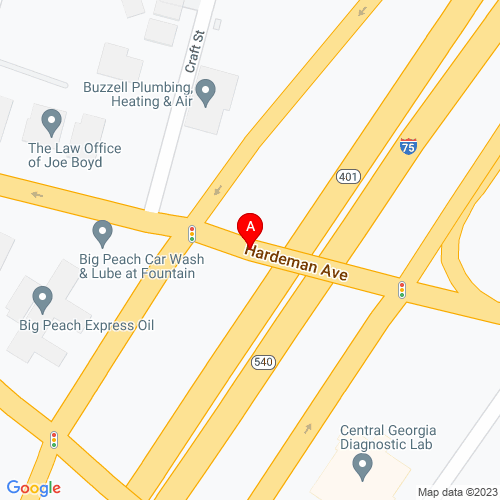