The Resting Place of the Allman Brothers.

Founded in 1840, this scenic cemetery bordered by railroad tracks on the banks of the Ocmulgee River provided artistic inspiration for the Allman Brothers Band in their early years, as immortalized in their songs “In Memory of Elizabeth Reed” and “Little Martha.” Today, ABB founding members Duane Allman, Berry Oakley — and now Brother Gregg Allman — are interred side-by-side in this beautiful resting place, which is listed on the National Register of Historic Places.

Their gravesite is located in the Carnation Ridge section of Rose Hill. Also worth seeing is the Bond Monument, where the Allman Brothers Band took one of their iconic first album photos, the “Little Martha” statue and the grave of Elizabeth Napier Reed.

Often compared to Paris’ Père Lachaise, and with over 50 acres of gravesites, Rose Hill is the final resting place for many of Macon’s most notable residents, including Confederate soldiers, poet Sidney Lanier’s parents, and writer Harry Stillwell Edwards. Macon’s music impresario Phil Walden is interred near the Bond Monument. One of his colleagues and fellow Georgia Music Hall of Fame inductee Joe Galkin, who partnered with Otis Redding on Jotis Records, is buried in the Hebrew Burial Ground section of the historic cemetery.

Rose Hill Cemetery is located off Riverside Drive, within short proximity to Downtown Macon. Rose Hill and the Historic Riverside Cemetery are adjacent but have separate entrances. Rose Hill is within walking distance from the original “Hippie Crash Pad” site of the Allman Brothers, located next door to the McDuffie Center for Strings. The Allman Brothers often walked from their apartment at the “Crash Pad” to Rose Hill Cemetery for song inspiration. Also nearby is the Pleasant Hill Neighborhood, where Little Richard was raised. 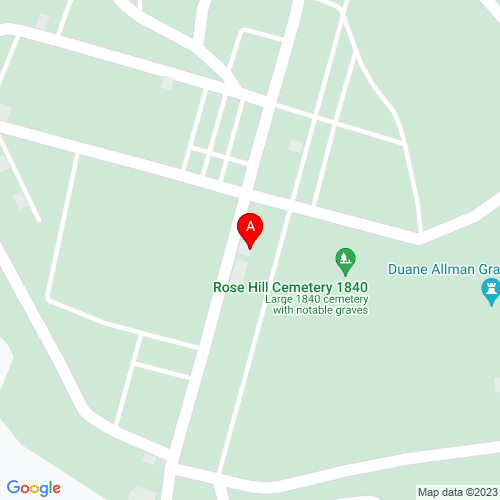