The Grand Dame Stage of Macon.

What started in 1884 as the Academy of Music grew into what we now know as The Grand Opera House, Macon’s premier theatre venue. With over a century of stage performances and countless music concerts — from vaudeville troupes and minstrel shows to local and world-renowned symphonies, musical theatre productions, choruses, operas and southern rock concerts — The Grand remains a landmark music venue, from its historic inception all the way to today’s modern music times.

The Grand Opera House opened in 1904 as one of the largest stages in the South at the time. Many famous performers have graced its stage, including Charlie Chaplin and magician Harry Houdini, who cut nine trap doors into its stage (with one still being used today). Musicians who have performed here include Hank Williams, the Allman Brothers Band, Ray Charles, Robert Shaw and the Atlanta Symphony Orchestra, the Macon Symphony Orchestra, and even a few Macon natives: internationally-renowned violin virtuoso Robert McDuffie and country superstar Jason Aldean.

A little known but notable artist who performed regularly at the Grand was minstrel performer Emmett Miller. Miller was born in Macon in 1900 and was an early country music singer, songwriter and recording artist. His pioneering, falsetto-like, yodeling voice became a later influence on artists like Hank Williams, George Strait and Merle Haggard.

At one of the many Allman Brothers concerts here, legendary music promoter Bill Graham introduced the band as part of a live concert taping for ABC’s “Don Kirschner’s Rock Concert” in 1973, which also included a performance by the Marshall Tucker Band. Members of the Allman Brothers Band would continue to leave their mark on the Grand for years to come. Gregg Allman performed many of his solo shows at The Grand, including his last concert appearance in Macon in 2015.

Holiday concerts remain an annual tradition at The Grand. Country musician John Berry has made it a regular stop on his holiday tour and Macon native Buddy Greene has returned to The Grand to perform his original song “Mary Did You Know?” in a homecoming concert. In 2013, Mercer University’s Townsend School of Music presented “A Grand Mercer Christmas” holiday concert with the Robert McDuffie Center for Strings Orchestra and the Mercer Singers, which was recorded live and aired on PBS.

The Grand Opera House is a cultural and historical landmark located in the heart of Downtown Macon’s business and entertainment districts. Its Mulberry Street location is adjacent to the Macon-Bibb County Courthouse and is within walking distance to numerous bars and restaurants, art galleries and pre- and post-show events. You can’t miss its glowing digital marquee, with the latest on upcoming concerts and events. Parking is available in an adjacent lot, as well as on-street parking found along Mulberry Street and surrounding blocks. Other music landmarks found close to The Grand include the Library Ballroom, the Hargray Capitol Theatre, Downtown Grill, the Otis Redding Foundation, Anderson’s Jewelers and the Macon City Auditorium. 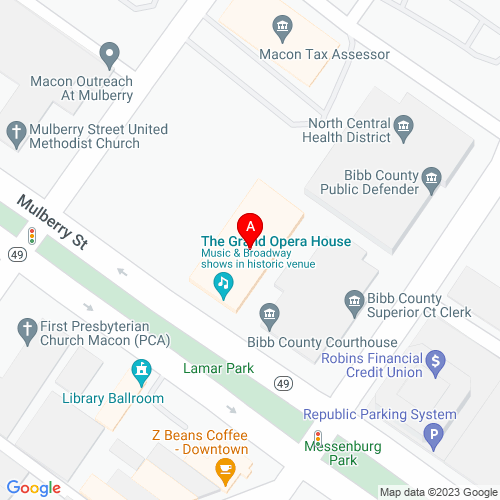