Where Bragg Jam was Born.

If Macon had an official rock cafe, it would be the Rookery. This locally-owned (and local favorite) is one of Downtown Macon’s oldest eateries. In fact, its outdoor Cherry Street sidewalk scene is considered a Macon landmark. The Rookery has its own music history — Widespread Panic played their earliest gigs here, many musicians have dined here, and Macon’s signature music festival Bragg Jam was founded here.

The Rookery has hosted countless live music performances since it opened in 1976. It’s also a longtime anchor of Downtown Macon dining, with a lively patio and a Macon music-inspired menu that pays tribute to Otis Redding, the Allman Brothers, Little Richard, and more.

It’s here in the comfort of this local, pub-style restaurant and bar that Macon’s signature music festival was born.

During the summer of 1999, Macon singer/songwriter Brax Bragg was on the brink of something big. He had just recorded a CD with his new band the Buckleys, and they were scheduled to set out on tour. But before hitting the highway with his band, Brax took his baby brother Tate, an accomplished classical guitarist, on a cross-country road trip. While traveling through Texas on July 3, the brothers’ lives were tragically cut short by a car accident.

Back in Macon, friends were reeling at the news of the brothers’ tragic deaths. Russell Walker, a friend of the family and fellow musician, organized an impromptu jam session at the Rookery, made up of local musicians to celebrate and honor the Bragg brothers’ talented lives. The healing power of music began something that night, and a year later, the jam session resumed at the Rookery and just like that, “Bragg Jam” had officially been born. By 2003, it was expanded into a city-wide music festival. Two years later, it was incorporated as a non-profit with a board of directors. Today, Bragg Jam has evolved into a full-scale community arts festival and Macon’s premier citywide music festival, hosting 40+ bands on more than a dozen stages around downtown during the last weekend of July.

What began as an untimely tragedy has found a way to both galvanize and give back to the Macon community. The organization also gives an enormous amount of money (over $200,000 to date) to community causes that meant a lot to the Bragg boys, including the Ocmulgee Heritage Trail and Amerson River Park.

Now under the management of the Moonhanger Group, the Rookery expanded to include a new listening-room style dining area and bar featuring the Creek Stage (named after the Creek FM, an independent radio station, located upstairs, above the stage). The venue hosts regional touring acts and intimate, small concerts.

Order any of the sandwiches and burgers off the Rookery’s creative menu that includes the Allman Burger, the Big O Burger and the Little Richard Pennimelt, as well as creative milkshakes and sides. The restaurant is lined with music memorabilia and concert posters, and if you look closely at the writing on the walls and wooden booths, you’ll see familiar signatures.

The Rookery is located front and center on Macon’s main vein, Cherry Street. The landmark restaurant is located in the heart of Macon’s Downtown, in the middle of the city block between the intersections of Second and Cherry Street and Third and Cherry Street. It includes a listening room and overflow expansion in an adjoining historic storefront, which also houses a locally owned and operated Americana radio station, the Creek FM. Above the Rookery is the fine dining restaurant Dovetail, also operated by the Moonhanger Group. The Rookery is around the corner from the Hargray Capitol Theatre, where regular regional concerts take place. It’s within easy walking distance to all of Downtown Macon’s restaurant and entertainment venues. 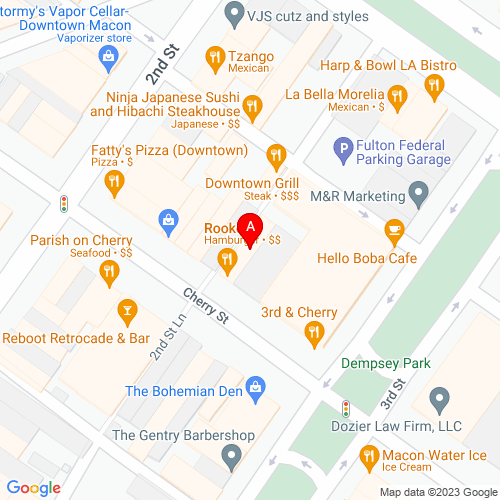