Where Little Richard Found His Groove.

Originally known as Ann’s Tic Toc Lounge, today’s Tic Toc Room still has the original brick wall that served as the backdrop to Little Richard’s earliest public performances. When Richard Penniman wasn’t working for Miss Ann as a dishwasher in the back of her business, he was front and center on the lounge’s small stage, entertaining one of the most colorful nightclub crowds of their era.

In the 1940s, Ann Howard opened one of the hottest night spots in town. Originally known as Ann’s Tic Toc Lounge, situated on the “Black Broadway of the South.” Restricted by racial segregation and considered a gay bar before there was such a label, Miss Ann’s Tic Toc gave African American performers a place to play. For Little Richard, Miss Ann was one of the few who gave him a chance, even if that meant washing dishes to earn money when he wasn’t performing.

It was here that Little Richard first threw on his cape, pounded the piano and created the blueprint that would later earn him the title as “The Architect of Rock n’ Roll.” In fact, his music includes direct references to the Tic Toc scene at the time in the songs “Long Tall Sally” and “Miss Ann.”

Other Tic Toc luminaries include James Brown and the Famous Flames and Johnny Jenkins and the Pinetoppers, whose vocalist at the time was a novice Otis Redding.

Today, the Tic Toc Room is a white tablecloth restaurant and martini bar serving steaks and seafood alongside mod dishes and locally grown and raised “seed to table” specialties.

The Tic Toc Room is just a block away from the Douglass Theatre, on the “Black Broadway of the South,” an African American entertainment district on what was then Broadway (now Martin Luther King Jr. Blvd.) during the South’s most segregated times. In addition to the Douglass, other nightclubs and businesses followed (like Ann’s Tic Toc Lounge), as well as hotels and barber shops that created a network of service support for black artists.

Today, Martin Luther King Jr. Blvd. is home to the historic Douglass Theatre, the Tic Toc Room, Visit Macon’s Downtown Welcome Center and Capricorn Sound Studios, re-launching as Mercer Music at Capricorn. Other music attractions on this street section include Fresh Produce Records vinyl record store and the Ampersand Guild. The Tic Toc is within easy walking distance to the Douglass Theatre, the Tubman African American Museum and Cherry Street Plaza, a pinnacle of Downtown Macon, complete with a set of fountains and water features (and available parking). It is also within walking proximity of all other Downtown restaurants and entertainment venues. 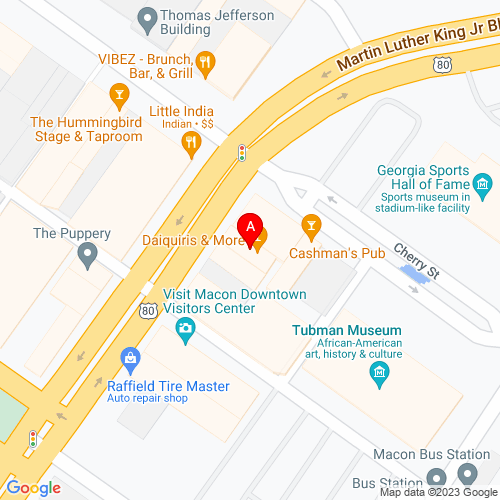 Login to Macon Music Trail
Reset Password
Enter the username or e-mail you used in your profile. A password reset link will be sent to you by email.