Status: Open To The Public • Tuesday-Saturday

The Rhythm of African American Culture and Influence.

Explore music artifacts or participate in the community drum circle at the Tubman Museum, the largest museum in the nation dedicated to educating people about the art, history and culture of African Americans. Offering music through exhibits and programming, the Tubman’s artifacts include the piano from Ann’s Tic Toc Room played by Little Richard and James Brown’s original reel-to-reel of his first hit single “Please, Please, Please,” which was recorded here at Macon’s WIBB Radio Station.

Since 1981, thousands of people from around the world have experienced art and history at the Tubman Museum, establishing itself as “an educational adventure through time.”

From the basket-weave brickwork and domed and peaked roofline reminiscent of a ceremonial headdress to the sleek 49,000 square-foot exhibit space, the Tubman Museum regularly rotates pieces of its 3,000-plus piece collection, as well as features visiting collections and exhibitions.

The Tubman is also host to the annual Pan African Festival of Georgia. Embracing cultural diversity while celebrating African influence in Middle Georgia, the Festival takes place every April and includes music, dance, art, storytelling and the Children’s Village. This family-friendly event also features Caribbean and Soul Food, as well as food trucks. There are also unique goods for purchase, as well as local and regional artists and artisans showcasing their works.

The Tubman also features numerous concert events, like its signature All That Jazz fundraiser, as well as a film festival and other events held throughout the year.

The Tubman also leads regular community drum circles that teach traditional West African rhythms. The all-ages event is free and open to the public. Instruments are provided by the Museum. Contact the museum for the latest drum circle opportunities.

The Tubman Museum is located in the heart of Downtown Macon, where Cherry Street Plaza meets the Terminal Station and known as Macon’s Museum District. It is directly across from the Georgia Sports Hall of Fame and has parking available in the Plaza or in it own lot behind the building’s entrance. There are also multiple bike racks outside of the Museum’s entrance, including a fleet of bikes available for rental through the Zagster Bike Share program.

Cherry Street Plaza is a pinnacle of Downtown Macon, complete with a set of fountains and water features. It is within walking proximity of all Downtown restaurants and entertainment venues. The Plaza is located just off of what was known historically as the “Black Broadway of the South” entertainment district. Now Martin Luther King, Jr. Blvd, the street remains home to the historic Douglass Theatre, the Tic Toc Lounge and Capricorn Records Studio, re-launched as Mercer Music at Capricorn. Other music attractions on this street section include Fresh Produce Records vinyl record store and the Ampersand Guild. 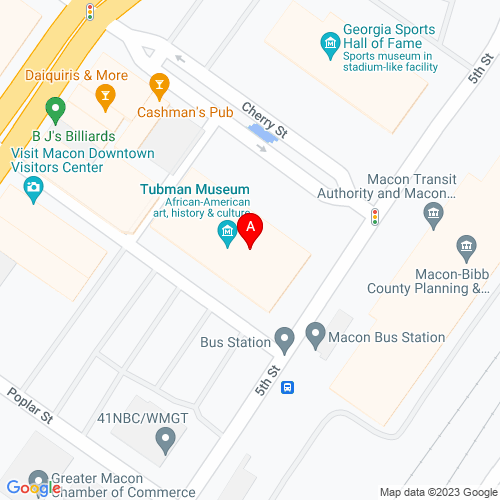