Status: Open To The Public For Performances, Unless Otherwise Noted

With choirs, instrumental ensembles, theater productions and dance performances, Wesleyan College offers a myriad of fine arts opportunities to engage the city of Macon. Housed in the beautifully appointed Porter Family Memorial Fine Arts Building, complete with 1100-seat auditorium and black-box theater, Wesleyan’s performing arts spaces are well equipped for concerts and events of all shapes and sizes. Most concerts and events are free and open to the public.

The first college in the world chartered to grant degrees to women offers two paths for students looking for a music degree. Music majors experience elegant performance venues, a collection of beautifully restored Steinway and Boesendorfer pianos, one of the most well-known organs in the Southeastern United States (Goodwyn-Candler-Panoz Organ) and access to an extensive number of scores, books and electronic resources. Wesleyan also offers a multitude of scholarship opportunities, including the prestigious Lane Scholars Program, which provides three, full-tuition scholarships annually to those whose intended major is in the area of fine arts.

The Porter Family Memorial Fine Arts Building is named for James Hyde Porter, one of Wesleyan’s most generous givers. In 1938, when Wesleyan was sold on the courthouse steps to a group of bondholders, Porter led the charge to buy back the College in order to support women’s education in Central Georgia.

Porter Auditorium, located within the Fine Arts Building, is the site of most performances held at the College, and is widely considered to be one of the finest performing arts venues in the region. With incredible acoustics, the restored Goodwyn-Candler-Panoz organ, a Steinway concert grand piano, orchestra pit and a versatile stage configuration, this auditorium is well-suited to performers and listeners alike.

The Goodwyn-Candler-Panoz organ is an Aeolian organ originally built and installed in the home of Asa Candler in Atlanta in 1925. In 1958, Mr. Candler gifted the organ to Wesleyan in honor of his late wife. The instrument underwent a complete overhaul in 2008 by the Shantz Organ Company, restoring its former glory and preparing it for the center stage. It is the largest musical instrument in Central Georgia.

Neva Jane Langley Fickling, an accomplished pianist who attended Wesleyan College and went on to become Miss Macon, Miss Georgia and then Miss America in 1953, remained in Macon and married William Fickling, where they remained staunch patrons of the arts.

Fickling would be the only Miss Georgia to be crowned Miss America until 2015, when Central Georgia native Betty Cantrell won the title. Cantrell also attended Wesleyan College and later transferred to the Mercer University Townsend School of Music, where she briefly studied vocal performance.

Steeped in a rich fine arts heritage, Wesleyan College provides a myriad of opportunities for students to develop and grow as musicians, artists and performers. Their multi-faceted offerings include regular performances and features throughout the year, enabling community members to come together and enjoy the arts.

Wesleyan College is located in the residential area of North Macon. It is located less than 10 minutes up the road from The Allman Brothers Museum at the Big House. Within this proximity is the Museum of Arts and Sciences, the largest general purpose museum in Georgia and only cultural institution in the state dedicated to both art and science. Founded in 1956 in the basement of the old Wesleyan Conservatory, the Museum’s 55,000 square-foot facility, located on 14 acres on Forsyth Road in Macon, offers a wide variety of art and science exhibitions, full-dome planetarium, mini-zoo with 70+ live animals, interactive Discovery House, beautiful nature trails, outdoor amphitheatre, 200+ seat auditorium, museum store and more. 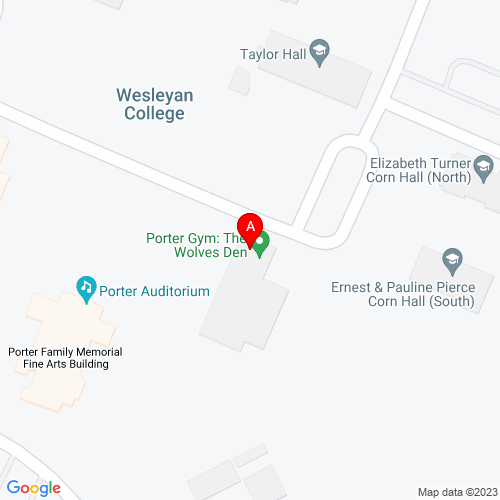